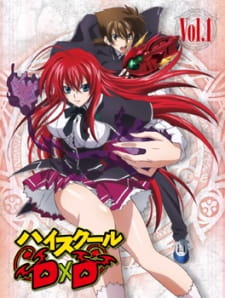 A series of 3-5 minute specials that were bundled with the HighSchool DxD DVD and Blu-rays. They are a stand alone set of episodes that are not a part of any story line in particular. Special 1: Going Sunbathing! – The Occult Research Club goes on a beach outing. Special 2: Issei’s Private Training! – Issei is being given lessons in magic by Akeno. Special 3: A Little Bold, Koneko-Chan… Nyan! – Koneko accidentally has her personality reversed magically, making her incredibly sexually active and reversing her sexual preference. Special 4: The Untold Story of The Dress Break’s Birth! – A few flashbacks of how Issei first found out and eventually perfected his special move, Dress Break. Special 5: Making Udon! – As part of a penalty for losing a bet, Sona and Tsubaki make udon for the Occult Research Club but the udon comes to life in a peculiar way… Special 6: Asia Transforms! – Asia wants to prove she is just as bad as any demon by using ideas found in Issei’s magazines, going as far as dressing up like a harlot and seducing him.